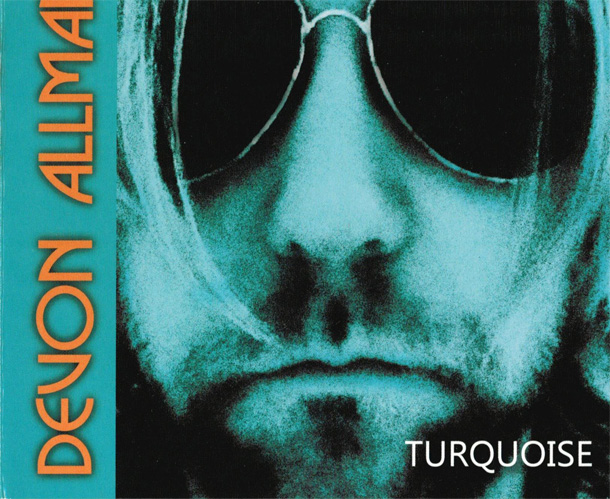 November 12, 2013
Devon Allman
Ruf Records
Producer: Jim Gains
Number of discs: 1
Buy it on Amazon
Get it from iTunes

In September 2012, Allman finished recording sessions for his first solo album. The sessions were recorded at Bessie Blue Studio and Ardent Studios, in Memphis, Tennessee, engineered by Pete Matthews and produced and mixed by Jim Gaines. Ron Holloway, who contributes saxophone on the song “Into the Darkness”, also made a guest appearance on Allman’s 2010 Honeytribe album, Space Age Blues

The material on Turquoise is highly-personal and reflects Allman’s life on the road over the past decade. There are ten original songs, including two tunes co-written with Royal Southern Brotherhood band-mate Mike Zito. Songs “Homesick” and “When I Left Home” are autobiographical tales. “These songs are very special to me,” says Allman in a press release for Turquoise. “It’s part ‘dusty road driving music’ and part ‘tropical getaway’ music. These are the stories, feelings and reflections from my last couple of decades of forging my musical path.

After spending more than a decade with Honeytribe and Royal Southern Brotherhood, the vocalist/guitarist (Gregg’s son) has stepped out with a solo album that tells his personal stories. Turquoise is well-crafted, more reflective than fiery, and soulful. Jerry Shriver-USA Today

Guitarist Devon Allman makes music that is inspired by the blues … and that s about all he has in common with his famous father, Gregg Allman of the Allman Brothers Band. Musically best described as Muddy Waters meets Sun Ra, the younger Allman finds inspiration in a wealth of influences, from Memphis soul and the guitar-driven blues-rock of the 1970s to jazz and R&B. –About.COM

Royal Southern Brotherhood unites two legendary roots-rock bloodlines along with a rising star guitarist and an in-the-pocket rhythm section for one of the most highly anticipated albums of the past decade. –Blues Revue